I suffered another flat on my rear wheel today.  This one occurred seven miles into a planned 30 mile ride.  But that was just the beginning of my fun.  I thought I was well prepared for this eventually and it was with some confidence that I pulled off the road and set about replacing my tube with the spare I keep in my saddle bag.  Things were moving very quickly at first.  After ten minutes the end was in sight and I was hopeful I would continue my ride.  In retrospect, I can’t believe I was this stupid.  Nothing works this smoothly for me.  Nothing.

I grabbed my CO2 cartridge and prepared to use it.  I’ve never used one of these things before but the concept is fairly straightforward.  You simply place the cartridge in a holder which you then thread into the “business end” of the device (the part which attaches to the inner tube).  Eventually, a small tip inside the device punctures the cartridge and you are all set to push air into the tire.

Stranded on the road in 95 degree heat, I was forced to once again call home for a ride.  This time my daughter had the honor.  I returned home to see my neighbor explaining to my wife how he accidentally set fire to the electric chain saw he borrowed from me earlier in the day, but that’s a whole other (nonbiking) story!

Needless to say, my confidence in CO2 cartridges is just a tad shaken at this point.  I therefore grabbed a tire pump my wife bought for me several weeks ago (“Thanks, honey, but I really don’t need that.  I’ve got CO2 cartridges!”) and put it on my frame.  It’s a tight fit between the pump and the big sprocket but a short 100-yard test ride indicates there is enough clearance for the chain when shifting. 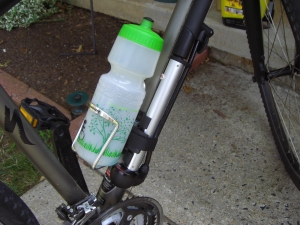 It’s been a tough cycling week, what with two flats on three rides, a broken spoke and a night in the shop.  Here’s hoping I’ve just hit a rough patch!