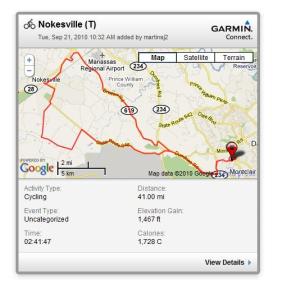 I haven’t gone over 40 miles since August 8th and with my 65-mile ride 10 days away I figured it was time to get back into the swing of things.  I had my new bike and all the “incidentals” (spare tube, water bottles, CO2 cartridge, etc…) necessary for a longer outing so I was all set.  I headed out toward Nokesville along Bristow Road.  As I descended toward the Occoquan River, it occurred to me this route would take me by many of the sites of my short-but-eventful cycling career.

First up was Brentsville, aka “Brakesville,” due to the multiple mishaps in this locale.  I’ve lost two tires, a spoke, and a pair of pedals in this little hamlet.  I pedaled past the old jailhouse and looked for ghosts.  Still nothing.  On my way out of town, a semi flew past me from the other direction.  The huge gust of wind caused me to lose my vision ever so briefly.  Naturally, this is when the pothole appeared.  I hit it with a thud and waited for the inevitable hissing sound of escaping air.  Amazingly, nothing of the sort happened.

Maybe my luck is changing for the better.

Next up was Bristow, scene of a broken spoke on my August 8 ride.  I was forced 20 miles home on a tire that was massively out of true.  It was so bad, the tire eventually flatted.  Today, all was well.  I zipped passed the Bristow Station battlefield and around a man-made lake.  I headed westward toward Nokesville.

In Nokesville, I stopped at a convenience store for some Gatorade and a sandwich.  Both were delicious.  I filled up one of my 28 ounce water bottles (4 ounces bigger than that on Old Ironsides) with the Gatorade and drank the remainder.  I noted that with my Camelbak I am now traveling with 126 ounces of fluid.  That’s a lot of fluid.  As I was leaving town,  I passed the high school which gave me shelter in a rainstorm and the town park where I once had a pleasant break and ate my first Clif Bar.  Now that I think about it, absolutely nothing bad has ever happened to me in Nokesville.  Given my track record, that’s a fact worth noting.

I picked up Carriage Ford Road and enjoyed a five-mile stretch of roads that may be the best for cycling in the area.  They are relatively flat, very straight, free of cars, and provide lovely farm views.  I passed Dumfries Road, the gravel route that I took (and developed a slow leak on) as part of the “Tenerife Incident.”  At the end of Hazelwood Road, I realized I hadn’t taken a pic of this great stretch and stopped to do just that.

I swung onto Fleetwood Dr and pedaled passed the Merrimac Wildlife Management Area and the gravel road that managed to flat my brand new Armadillo tires.  I’m still shaking my head at that one.  In short order, I was turning right onto Aden Road and steeling myself for the four miles of climbing that were to come.  A couple of miles up the hills I paused at a historical marker which I never paused to read before.  Virginia has signs like this ALL OVER the place, marking the most insignificant of events.  I guess it gives the prisoners something to do.

A few miles later, I was back on my old friend, Route 234.  An elderly cyclist was emerging out of the tall grass and I slowed to ask him if everything was alright.  I believe he was just “relieving himself,” but I wanted to be sure.  I think I embarrassed him because he chased me down in a couple of miles and made a point of flying by me.  I could have hauled him in, but I was watching my heart rate in an attempt to train myself to moderate my calorie burn on long rides.  Remember kids, when you decide to match skills against another passing cyclist, you have no idea what kind of workout he is on or how far he has already ridden.  Moderate your sense of accomplishment accordingly.

All in all, it was a very nice ride.  Good weather and not a single mechanical mishap as I pedaled past the markers of this summer’s personal wreckage.  I remain concerned about my fitness level for the upcoming 65-miler.  A review of my Garmin data shows my average heart rate steadily climbing throughout the ride.  By Mile 41, it was well into Zone 4 – a bad place for a guy wanting to go another 25 miles.  I’ll need to be especially careful not to overdo it too quickly in Culpeper.