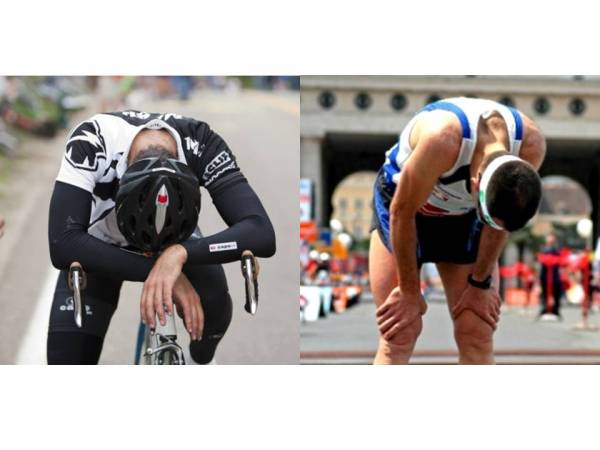 As I staggered into the Fredericksburg Pizza Hut at the conclusion of last weekend’s 200k ride, I was well and truly knackered (a British expression meaning exhausted, or “ready for the knacker’s yard,” meaning a worn-out farm animal ready for slaughter).  As I chatted with other ride finishers, I mentioned that this was the hardest physical thing I have done since I ran a marathon in 1993.  After expressing incredulity that I actually ran 26.2 miles (if you saw me in person, you’d understand the reaction), the conversation turned to a comparison of endurance running versus endurance cycling.  Specifically, we wondered how far must a person cycle to equal a marathon?

My answer?  It depends.

I often wonder how cycling translates to running.  When I got back into cycling, my thought was three miles on the bike equaled one mile in running shoes.  As my fitness improved, my opinion on that ratio  shifted to about 4:1.  I now believe anything approaching an ironclad ratio is not possible.  Thus my official answer – It Depends.

Cycling and Running enjoy a complicated relationship.  On the surface, the disciplines are similar enough to invite comparison.  They both involve large amounts of cardiovascular fitness, traveling/racing over an agreed-upon distance, and legs are the primary power source.  Both sports allow for large differences in abilities, meaning you don’t have to be elite to enjoy and participate.  Both have rides and races of varying distances.  For running, the most common “masters level” distance for testing endurance is the marathon.  For cycling, it’s not so clear.

Many people point to centuries as being the equivalent of a marathon.  I can’t say I entirely disagree with them.  Centuries are certainly the most common long-distance ride and the longest distance most serious cyclists will sign up for.  Centuries are almost exactly four times as long as a marathon, thus supporting the 4:1 Ratio Conversion Theory quite nicely.  I have only one problem with this comparison: my century rides, while very challenging, have never tested me the way a marathon has.  Not even close.

When I finished my marathon, I was in agony.  Every step was difficult.  I was near total exhaustion and every part of me ached.  I shuffled to a reception area where a volunteer put a medal around my neck, a shiny blanket around my shoulders and handed me an orange to suck.  I was grateful.  I recall having to climb a small hill to get to my car and just how difficult that was to do.  The next morning, I had difficulty walking downstairs.  It took me about a week to fully recover.

Not so with centuries, after which I am usually quite tired but not overwhelmed.  If there is a meal to be had, I’ll eat it.  If not, I’ll go find a meal.  Beer is always welcome.  I may be saddle-sore, but I am fully able to walk about.  I may need a nap and the next day may have some stiffness, but that is about it for long-term recovery.  The extra 31 miles in my 200k (plus 8,700 feet of climbing) definitely made me feel more like I did after a marathon.  Still, it was only close to the experience, not as bad.

So for me, the 200k distance is most like running a marathon.  Your mileage may vary.